If I told you there was a way to create money out of thin air on Betfair, how would you react? The truth is that there are many ways to do this on Betfair which have never been shared before….until now.

This method is one of many that I use on snooker and it is called “Betting before the event starts”. It is amazingly simple and also extremely low risk. It involves placing a bet before the start of a snooker match in the match odds market and then laying it off for a nice profit.

So, why does this work? 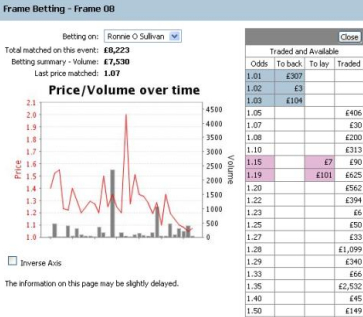 A snooker match is usually very volatile. The reason for this is because is it very likely that one player will completely dominate a whole match, especially when matches are usually out of 8 or more frames, giving the other player plenty of chance to win a frame. This is illustrated in the graph above which shows that no matter if backed or layed at the start of the match, there would have been plently of opportunity to trade out at a profit.

The great thing about placing a bet before the start of the match is that you don’t have to wait for a trading opportunity. You literally create a trade from nothing. The screenshots below take you through how we used this method to create a green screen:

The screenshot above shows that we placed a £100 bet on Mark Selby before the event started. The match was quite close and the odds stayed the roughly the same for around half an hour.

After a few frames had been played, Mark Selby edged ahead and we managed to trade out with a green screen. At this point we could have equalised the bet or using our profit weighting method to shift some profit onto O Sullivan just in case he won the match. We decided against this and we were proved correct when Mark Selby won the match and became the winner of the 2008 Welsh Open snooker tournament.